Workshops with young people on the issue of equality 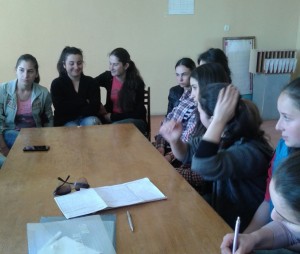 Young people in Tshalutbo, Senaki and Honey with a special interest discussed the topic of gender equality. The topic of disagreement was the issue of how to define the role of the family equally. One of them said that the Georgian woman traditionally obedient to her husband and the husband is the ruler. When this "balance" is broken, resistance and conflict starts.
Young people also talked about the mechanisms to resolve the situation. According to them, since equality is violated, there is a victim and rapist. So the key to resolve conflicts they see in gender equality. 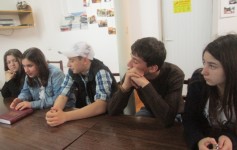 Participants of the discussion noted that it is impossible to destroy the stereotypes in one day. It is not enough one-time events for that. We need to realize that gender equality will reduce the risk of family violence, and the process should include the whole of society.
The project is implemented with the support of the organization Brot
für die Welt – Evangelischer Entwicklunsdienst (Germany)

Activities of Senaki Gender Advisory Council – in the air of “Egrisi”

TV Company “Egrisi” in Senaki aired information regarding ordinary meeting of Senaki GAC, regarding preoperational work of local gender needs research. As the respondents mention the aim of the research is socially oriented local budget, more fair allocation of local resources which should be based on recommendations received as a result of the research.
Attention was paid to one gender need. This is protection of women from domestic violence, which is served by psychological and legal consultations organized in fund “Sukhumi” Senaki GAC. What services have the WSCs and how pleased are the beneficiaries – fund “Sukhumi” psychologist, lawyer, meeting participants, local and IDP women.
The project is implemented with the support
of the UN Women’s Fund for Gender Equality 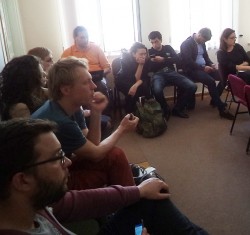 Partnership with Czech non-governmental organization «The independent socio-environmental movement “NESEHNUTI” is carried out for 4 years. Arranging festivals of youth forum-theatres, support of gender advocacy process in Kutaisi, Bar Camp in Kutaisi, hosting youth international group of the fund “Sukhumi”.
More than 20 representatives of Czechoslovakia, Belarus, Armenia, Azerbaijan and Georgia actively familiarized with activities of the fund “Sukhumi”, number of questions was put and great interest was shown towards women organization.
In frames of partnership development a trip of fund member is planned in 4 countries of Western partnership. 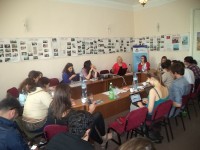 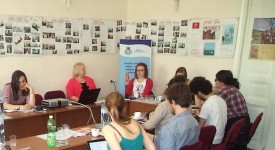 Meetings in the youth clubs on actual issues 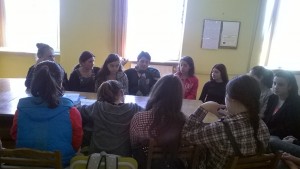 Another 3 meeting of youth clubs regarding ethics, aesthetics, sexual education and early marriage was conducted, this time in Senaki school №7 and Women's Support Centre of Poti and Kutaisi.
These topics were actual for the participants. Therefore, there were held active, frank discussions. Young people made interesting parallels with life examples.

The meetings became the beginning of the interest from the side of participants. The main result is that they have the desire, to seek further information on these matters, and then conducte informational meetings for peers.
The project is implemented with the support of the organization Brot
für die Welt – Evangelischer Entwicklunsdienst (Germany)