Training is one of the types of interactive learning. The category reflects the trainings conducted in frames of the projects, as well as participation of the Fund “Sukhumi” staff in the trainings of other organizations.

Training for the journalists in Ozurgeti – at the end of training 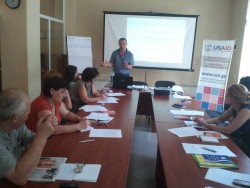 For the journalists of Ozurgeti, Senaki and Kutaisi, after cooperation with the fund “Sukhumi” gender thematic became “native”. As they say, they must learn more in this aspect.
On September 8 on the initiative of Ozurgeti Gender Media Center there was held a training on the issues of gender budgeting. It was attended by local and Kutaisi journalists.
Training was led by representatives of Democratic Union of Georgia  - Levan Khintibidze and Irakli Papava. Attention was paid on budget system of Georgia regarding program and gender needs of budget, on participation of the citizens in implementation of self-government and role of media in formation of gender budget.
After training there was a surprise from George Girkelidze – head of Gender Media Center – representatives of Kutaisi media, visited monastery of Shemokmedi and inclusively for them, a fountain was turned on in the park of Shemokmedi, opening of which is planned at the end of month.

“Own” peaceful planets of the girls – at the end of training 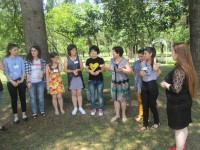 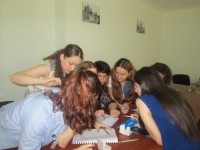 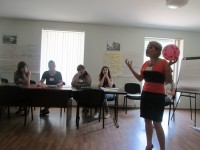 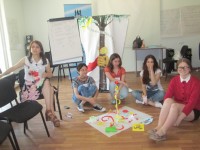 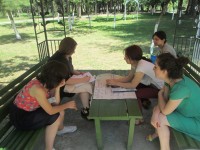 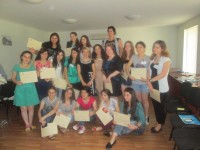 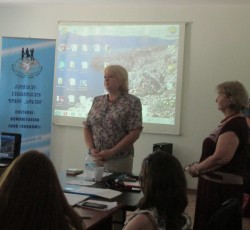 18 girls gathered in Kutaisi in the Hotel “”Imeri from different parts of Western Georgia (Kutaisi, Tskaltubo, Zugdidi, Khobi, Gali, villages of Zugdidi Municipality – Gamukhuri and Abastumani).
Most interesting, motivated and creative ones out of 23, were chosen by the – as it was demanded by the training.
The girls actively worked on: “Analysis of Georgian – Abkhazian conflict, gender aspects of post-conflict regulation (including creative methods)”.
The training was held in frames of joint Georgian – Abkhazian project “Strengthening of women’s voices on the level of decision making” (donor: federal department of foreign affairs of Switzerland).
During four days the participants touched many interesting, familiar and unknown issues: reasons of Georgian-Abkhazian conflict, ways of regulation, mission of UN and other international organizations, Geneva negotiations, women leadership, peaceful vision.
Among the participants there were girls from conflict zone, who gave lots of interesting and received also important information for them.
The training was held with by experience trainers with great interest, also experts in the issues of Geogian-Abkhazian conflict – Yulia Kharaishvili, Dali Khomeriki, Khatuna Gogua and Eka Gamakharia. Different blocks were attended by the director of the projet Alla Gamakharia, coordinator – Meri Gelashvili.
Last two days, the girls were “torn of” the real world – they created own planets with own dictionaries, found their ways of regulating Georgia – Abkhazian conflict. It was very interesting and unsusual…
The training was especial – by active discussions, group work and presentations, games, informal relations, attending performance of the forum-theatre.
We can endless write about emotions of girls, which they openly shared at the end of training:
“Training gave me knowledge, wings, enthusiasm!”
“I received information about stages of the conflict, learn about dynamics of Georgian-Abkhazian conflict”.
“I persuaded that my fantasy and ideas have no limit!”
“Tired and full of emotions!”
The project  is implemented with the support of
Federal Department of Foreign Affairs   of Switzerland FDFA

Training on the issues of NGO sector

On July 8, a training was held with the disabled persons. They were given information regarding NGO, how many people can create it, what types of organizations exist, who can fund, how should be written the project.
They mentioned that this information was new for them and they were satisfied. 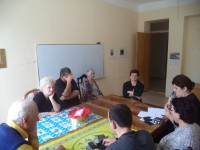 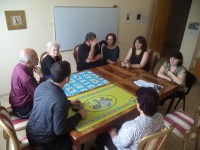 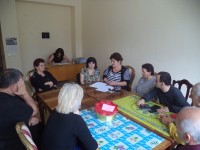 Training for representatives of local self-government

On June 19-21 a training was held in Borjomi with participation of 23 representatives (15 men among them) of local self-government of Kutaisi, Khoni, Tskaltubo, Batumi, Poti, Ozurgeti, Senaki, Zugdidi. The topic of the meeting was chosen according of the maind directions of the fund “Sukhumi” in Western Georgia – “Preventive strategy of local self-government in fighting against domestic violence”.
Its schedule covered following issues: gender, gender violence, types of violence, Istanbul convention, law against domestic violence, action plan, legislative changes.
On a last day of training strategies in action plan in all cities were elaborated in direction of domestic violence prevention and victim protection.
8 cities of Western Georgia expressed readiness in fighting against violence, the victim of which is majority of women.